Friends, fellow carb-lovers, insatiable inner-fat-kids, lend me your ears. I present to you: the world’s longest baguette, measuring in at a delicious, drool-inspiring 400ft (!!!):

LOOK AT IT. FEAST YOUR EYES UPON THIS MAGNIFICENCE. (But only your eyes, because if you try and touch what is rightfully mine, I’ll bite you.)

So here’s the backstory, if you can wipe the drool from your chin long enough to focus: Earlier this month, at the Milan Expo 2015, French and Italian bakers set out to beat the previously held record of world’s longest baguette (364ft. I call that a ‘mid-morning snack’ around here). They worked at a rate of 20 meters (66ft) per hour, sliding the dough through a portable oven that cooked it in sections, and fighting against the elements (cold weather! breakage!) like the brave, heroic souls that they are. The whole enterprise was monitored by the Guinness World Record Committee, and sponsored by Nutella. Repeat: SPONSORED BY NUTELLA. So you know what happened after they set the 400ft record, don’t you? DON’T YOU??

Beethoven’s “Ode To Joy” started playing in my head immediately upon seeing this photo. Oh, how I wish I’d been in Milan for this! Because expo-goers got to eat pieces of it after they had finished. We’ll ignore the fact that it looks less like a crispy, crunchy, traditional French baguette, and more like a slightly burned Italian roll, because honestly, it’s bread of an endless quantity, covered in Nutella. If there is anything sexier than that, I have yet to find it.

Happy weekend, kiddos! And I would wish you all a Happy Halloween, except I am not-so-secretly terrified of/hate Halloween. You can read all about that here, and see some awesome costumes I wore in my childhood right here.

Hat tip to my friend Herbie for sending me this story!

File this under “The Most Ridiculous Thing I’ve Read in Years”, cross-filed under “I Can’t”: a well-meaning janitor at the Museion Bozen-Bolzano, a few hours north of Venice, Italy, dismantled a modern art exhibit because she thought it was trash. Literally.

The cleaner was new, and had been told to clean part of the gallery after a book party the night before. Seeing empty champagne bottles and party remnants on the floor, she naturally assumed “Where shall we go dancing tonight?” was her assignment, and proceeded to bag everything up and dump it into recycling bins, perpetrating an accidental art heist. Though, does it count as a heist if she only threw everything in the garbage?

The museum director was able to re-install the entire exhibit by pulling the items out of the trash. A popular Italian art critic, Vittorio Sgarbi, has summed this whole situation up better than I could, saying the janitor’s cleaning spree was entirely justified. “If she thought it was rubbish, it means it was. Art should be understood by everyone — including cleaners. The fact that the museum could simply pick the pieces from the trash bin and put them back together shows you that wasn’t art in the first place.” Mic drop.

Now pardon me while I go giggle for a little bit. And dig up this quote from Steve Martin’s “An Object of Beauty,” my favorite book about the art world: “You want to know how I think art should be taught to children? Take them to a museum and say, ‘This is art, and you can’t do it.’” Some art is just garbage. 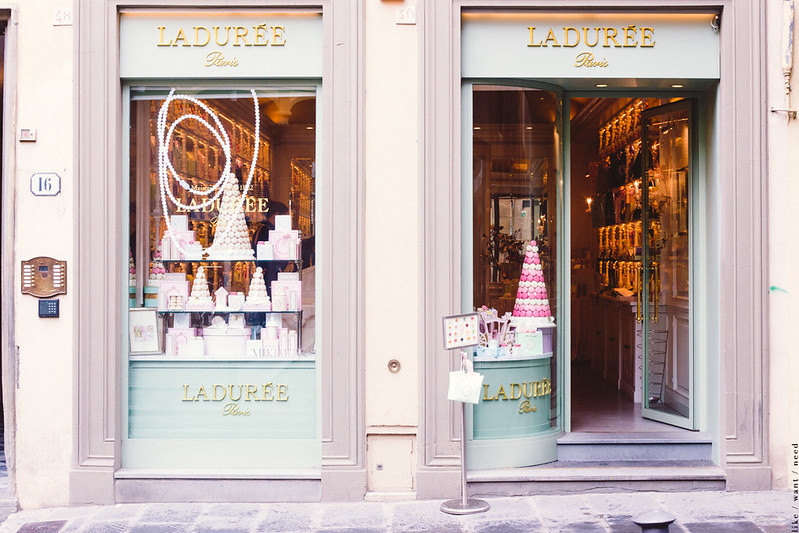 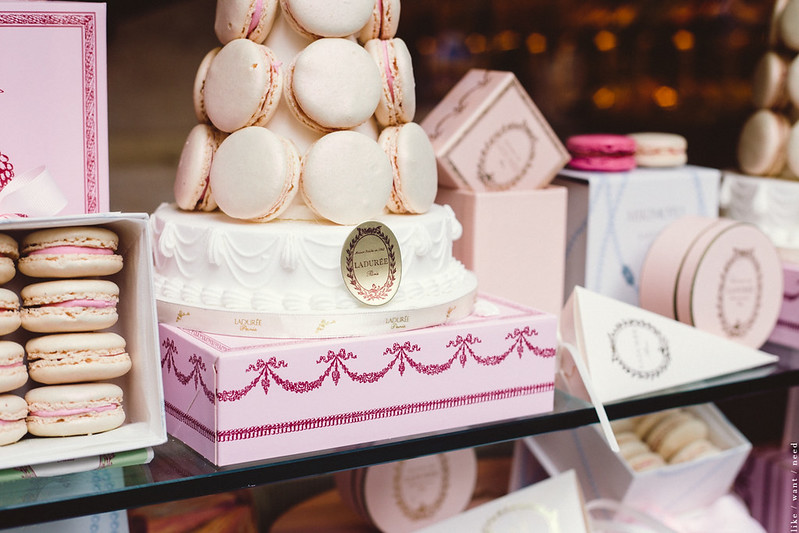 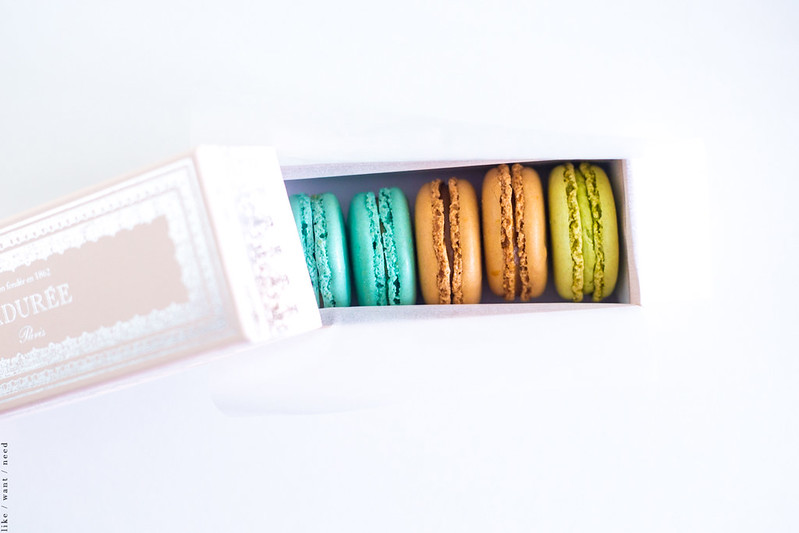 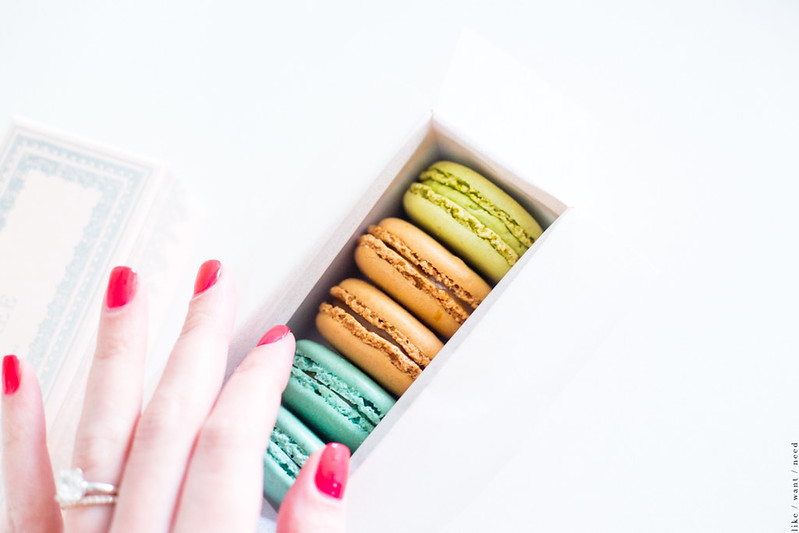 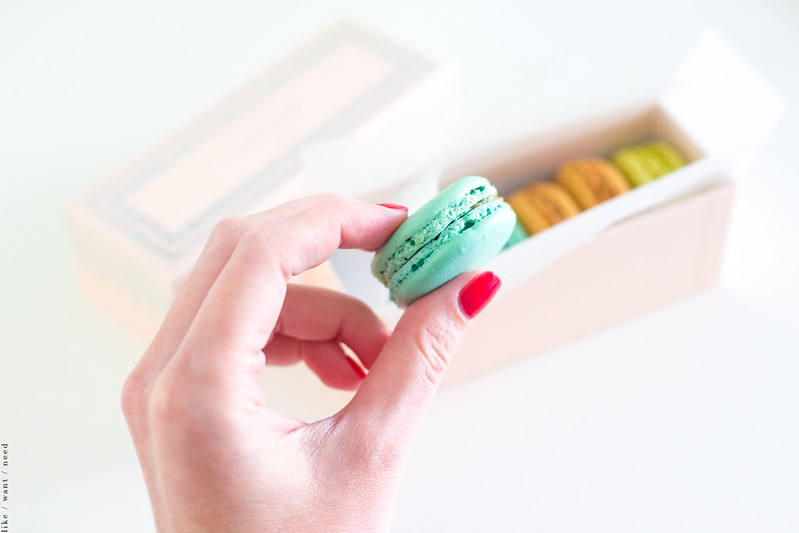 Just a few darling (mouthwatering, if you’re anything like me) photos of Ladurée from our trip to Italy this spring to start your weekend on a sweet note. I stopped at the Ladurée cart in the Charles de Gaulle airport on our way to Rome, and then also popped into the boutiques in both Rome and Florence, because when macarons are your favorite food group, you indulge in them whenever the opportunity presents itself. This store is such a jewel box of delicate delights, and if they allowed franchising, you can guarantee I would’ve opened a store in Philadelphia by now.

Now that we’re under 40 days away from my upcoming (second-time-this-year-but-who’s-keeping-track) trip to Paris, I thought I’d share where I’ll be staying. If you guessed Montmartre, you were right! I can’t shake this neighborhood, no matter how much time I spend there, and it’s where I’ve stayed on every trip going back to 2013 (here’s 2014 and 2015). This adorable little nest charmed me from its original floors, to its large, airy windows, and bright, white decor. And did I mention I love Montmartre?

(I’m renting through Airbnb again, and I’ll be happy to share a link to the rental after I get back; since I’m going alone I don’t want to broadcast my exact location in advance. Safety first!)

Artist Hayoon Kim has a doctorate in Ceramic Design (did you even know there was such a thing?) and since 2006 has been creating gorgeous, delicate bone china for art galleries, brands, and designer collaborations, through her company Twig New York, as well as teaching pottery to students in Seoul. I came across her work at a tea shop here in Philly and fell in love. Specifically, her ‘Petals’ collaboration with artist Brittany Jepsen, and my jaw hit the floor.

Kim has about 10 other collaborations with other, equally talented designers, but Petals spoke to me the most. They look three-dimensional on the plate, don’t they? I’m lucky I’m not the only one who finds these pieces so gorgeous, because most of the collection was sold out. Otherwise I would’ve had to buy everything, but especially those mugs. Mon dieu.

I know I tend to only ever wax poetic about Paris and its many luxurious, drool-worthy apartments (see: here) but it’s not because I’m unaware of the grim reality of the affordable real estate available there. If anything, it’s precisely because I’m aware of how many absurdly small, one-room hovels (that will still cost you €100k!) the city has that I instead choose to focus on the unattainable, multi-million euro sprawling ones. But for a change of pace, I thought it might be fun to see what I could afford, right now, without mortgaging myself to the hilt or robbing a bank or becoming the next JK Rowling. The results were…less than stellar.

For those of you unfamiliar with Parisian real estate, the top floor of nearly all Haussmann buildings were at one time maids quarters, often referred to as a chambre de bonne, chambre de service, or a studette, which are single-room living spaces, usually under 100ft2, with a shared toilet in the hall. For someone like me, the daughter of an architect who championed small-space living, I get such a thrill at a seeing smartly renovated chambre de bonne. The challenge of designing and living in a space barely larger than most powder rooms is one I’d happily take on, especially if it meant, you know, being in Paris. Which is good, because apparently this is all my savings can buy me. So while these apartments are, shall we say, terrible, there is so much room for improvement that all I can see is potential.

It’s listed as a “one bedroom” but really, it’s one empty room, with one teensy (but cute) window. The toilet is in the hallway, the sink is on the landing, and it appears there’s a water hookup line available in the apartment itself, but no shower or kitchen sink.

2. Next, we have…whatever is happening here:

Located in the 10eme, near Gare du Nord and Gare de l’Est, the listing says it is about 10m2 of living space, with a shower, a well-equipped kitchen, and a toilet in the hall. “Ideal pied-a-terre,” it says! The only thing I can see is a twin mattress shoved under a skylight, with a water tank floating precariously above it.

3. Moving right along, we have this apartment, also in the 10eme:

It is a whopping 9m2, with a small balcony you probably shouldn’t stand on, a small but functional kitchen (who is cooking in Paris with some of the best restaurants right outside your door?) and a lofted bed. Smart space solution! Bathroom is in the hall. I want to scrub this entire place down with bleach.

It features a separate bedroom (!), a shower right next to the kitchen, and a murder-y looking hallway and stairwell. It also features a shared toilet you’d need both tetanus shot and a regular shot of the highest proof vodka you can find to actually pee in.

Price: €129,000, and the saddest part is it still seems a worthwhile splurge.

Because you haven’t seen enough photos from my trip to Paris last year, and because I leave again in 50 days, here are five more for your weekend. 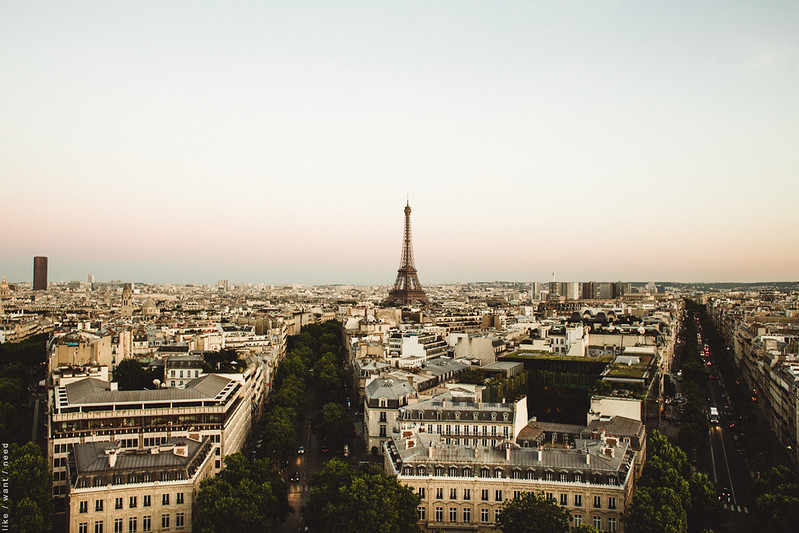 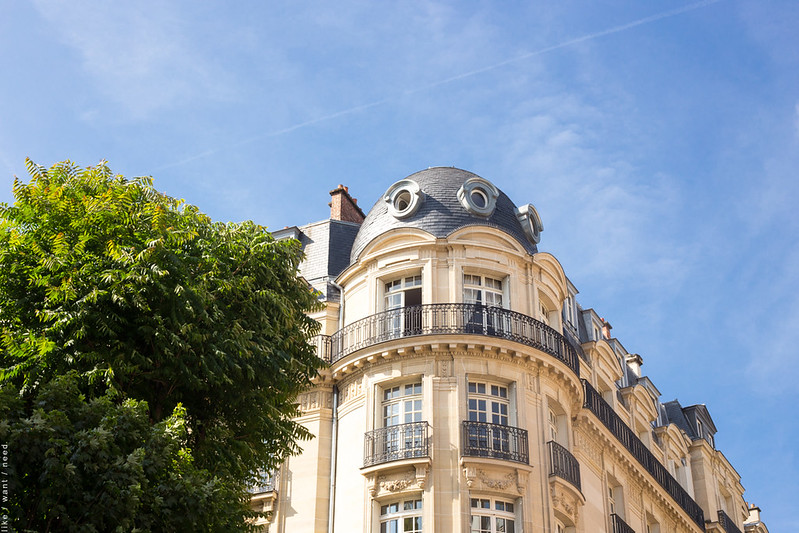 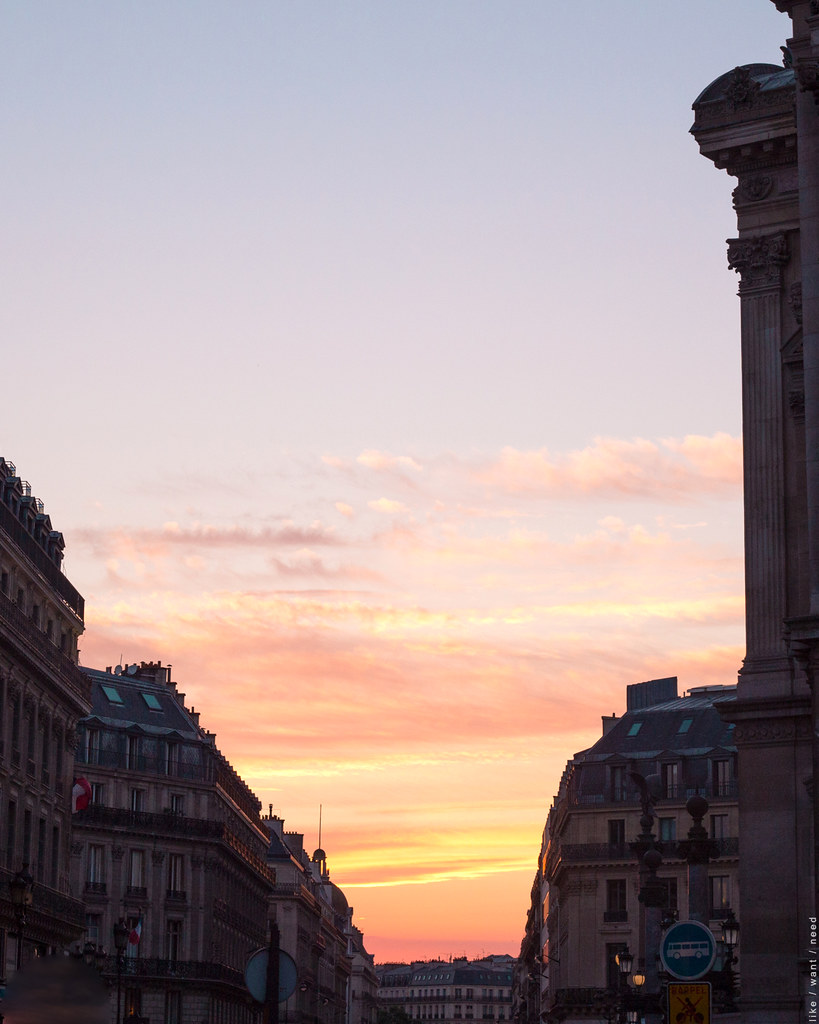 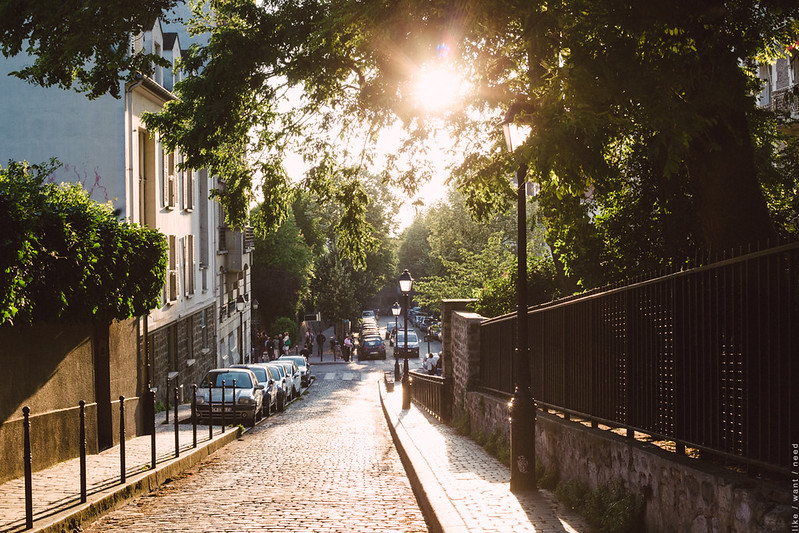 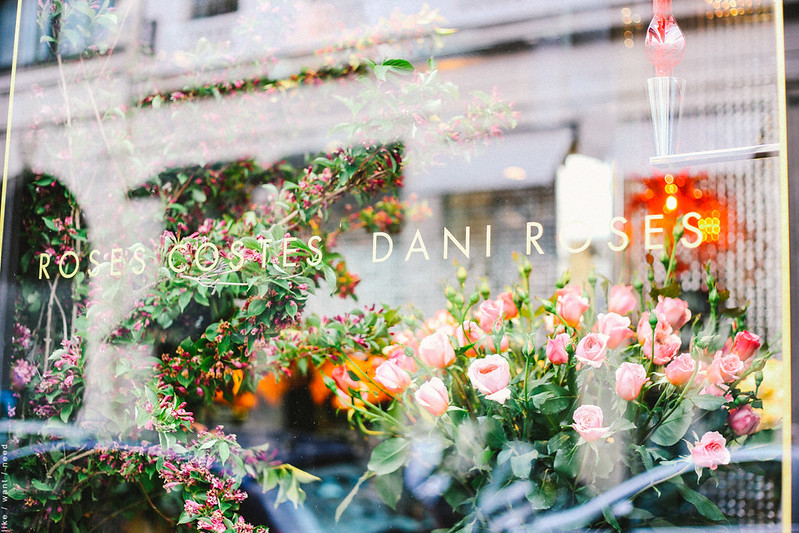 Well, that was a week-long blog vacation I didn’t intend on taking, and the first absence I’ve had when I wasn’t swooning around on vacation. It’s funny, I never knew how much I needed this blog until I suddenly…didn’t. For four years, this blog was my creative outlet, a respite from the grinding unhappiness of a day job that left me unfulfilled. I needed it, because I needed a balance, and at the peak of my blogging I was posting five times a week (!! five! What on earth did I write about??). Then it went down to three. And in the three months since I left my job, I’m lucky if I can manage to crank out one measly post a week. Isn’t it strange that now that I have more time on my hands, I somehow have less time to blog? My days are filled with writing, and food-styling, and studying for my real estate license (and exercising my domesticity/ perfecting my housewife status). When I am happy in my day-to-day, I turn less and less to the internet, this blog, my Pinterest boards, and other aspirational escapes. I haven’t been tending to my blog because I haven’t needed it to stay afloat, to keep my head above water. But that doesn’t mean I don’t still owe this space (and you guys!) some attention, because of course I do. I just need to find a different balance than what I had for so long, and I promise I’ll do that without abandoning it for days at a time. Pinky promise, kiddos!

Here’s a little update of what’s been going on behind the scenes:

I miss you guys! How the hell are you?