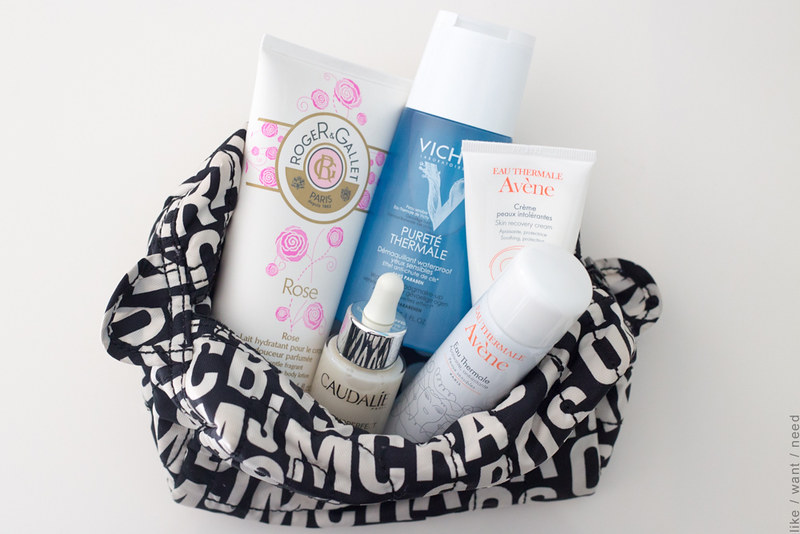 I love French pharmacies. There is a pharmacy on virtually every street in Paris, identifiable by the ubiquitous neon green crosses that flash the temperature and time. The pharmacists are not just high school kids working a register; French pharmacists are trained and knowledgable, and you can find beauty brands like Darphin, Nuxe, Caudalie, L’Occitane, Roger & Gallet, Bioderma, and all the other French names you’ve heard celebrities and bloggers rave about for years.

I went to pharmacies frequently in Paris. Some days, my main activity was walking down to Saint-Germain to City Pharma, the discount, two-story pharmacy on Rue de Four. Bury my ashes at City Pharma, oui? There may be a pharmacy on every corner in Paris, but if you’re looking to pay €3, €5, or even €10 less per item, it’s worth the trek to this particular store. Don’t be alarmed if you can barely fit in the aisles and don’t be put off by the insane line. There’s also a pharmacy on Rue de la Chaussée d’Antin, right next to Galeries Lafayette, where the prices were equally as competitive.

I want to preface this by saying all of these products are grossly more expensive in the states than they are in France. By almost double, in some cases. Cheaper than a flight to Paris, but less fun. Süsk, I might be taking you up on your offer for a refill shipment at some point! 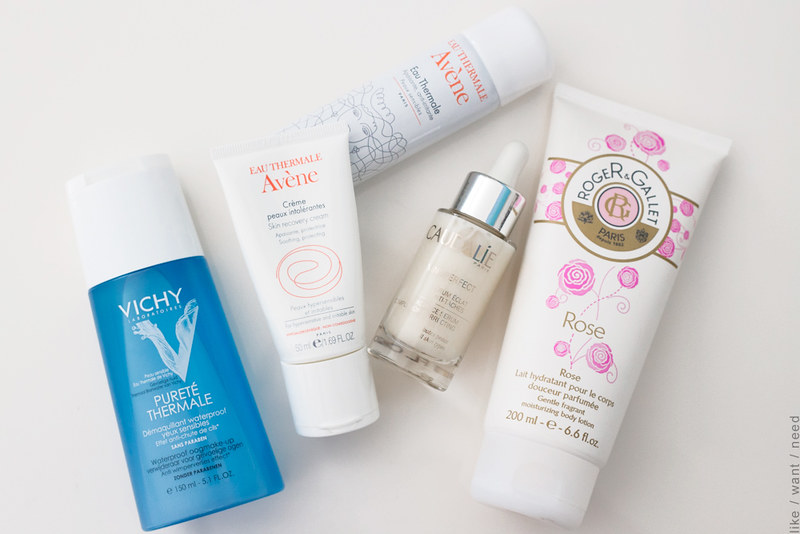 Vichy Pureté Thermale Waterproof Eye Makeup Remover / I arrived in Paris without my luggage, which wasn’t a problem as I’d prepared for that scenario and packed a ton of essentials in my carry-on, like clean underwear and my favorite stuffed animal(s). My Clinique waterproof eye makeup remover? In my checked luggage. I had been using the much raved-about Bioderma Sensibio solution since our March 2013 trip to Paris, until I switched to waterproof mascara earlier this year, and the Bioderma –despite endless claims otherwise– was ineffective at taking it off. After scrubbing furiously with bar soap in the shower and removing half of my eyelashes but none of the mascara, I went to the first pharmacy I found and bought whatever makeup remover said “waterproof” on it. By a stroke of luck, it happened to be Vichy Pureté Thermale, and it is amazing. You’ve seen the results! Doesn’t burn, smell, or leave a filmy residue. €9 in Paris, $20 here.

Avene Skin Recovery Cream / After an overzealous application of brand benzoyl peroxide cream one night early in the trip (I blame the airplane/jetlag/croissants for that breakout), I woke up with a flaming red patch of burned skin on my chin. I slunk around the corner to the pharmacy and cobbled together enough French to tell the pharmacist that “J’ai utilisé beaucoup de…uh, comment-dit-on, “benzoyl peroxide”? Et maintenant, mon peau est rouge et irritée.” Translation: I should have trusted the package when it said “use in moderation.” He led me to the Avene section and handed me Skin Recovery Cream, explaining it was made for sensitive, irritated skin. When I got home and opened it, I was dismayed to find that it was a thin, light moisturizer. Surely I needed something heavier? Non! This stuff is gentle, beautiful magic, and it healed my skin within two applications. I haven’t learned my lesson with the benzoyl peroxide, so this stuff will remain in my arsenal. €15 in Paris, $32 here.

Caudalie Vinoperfect Serum / Despite my efforts to avoid the sun, and diligent use of spf 20 moisturizer and spf 25 sunscreen every single day, I somehow have a few sunspots on my cheekbones. My dermatologist (whom I have on speed dial) prescribed me a 4% Hydroquinone cream, but the potential side-effects (it’s illegal in most of the EU) deterred me from even filling the prescription. After some research, I landed on Caudalie’s Vinoperfect line. Made from Viniferine, an active ingredient made from grapevine sap, Vinoperfect Radiance Serum is natural, milky, light, and won’t give me ochronosis (don’t google that). I’ve been using it for a little over two months and have barely made a dent in the bottle. I can definitely see some spots lightening and fading. €34 in Paris, $79 here.

Avene Thermal Spring Water / The first time I used this in front of Jamal, you would have thought I’d sprayed Agent Orange on my face for the way he reacted. It’s basically an aerosol can of water, and I’m not sure it does much for my skin besides make it feel refreshed and dewey. But in this heat, that’s enough. €2 in Paris, $9 here.

Roger & Gallet Rose Body Lotion / My favorite, favorite lotion. I went to probably fifty pharmacies this trip trying to track it down, and finally found, and purchased, the last two bottles at a pharmacy near Ternes. I can’t even find it online –it’s sold out or missing from every Roger & Gallet stockist!– so I’ve linked to the tub rather than the bottle I have. The scent is divine. Rose-scented things can go ‘perfumed grandma’ easily, but this stuff doesn’t. You only need the smallest dollop for both legs, which is good, because I am rationing my last bottle in the likely event I can’t ever find it again. €12 in Paris, $24 here.