credit: Maison Carnot. Merci to Whitney for sending it to me. 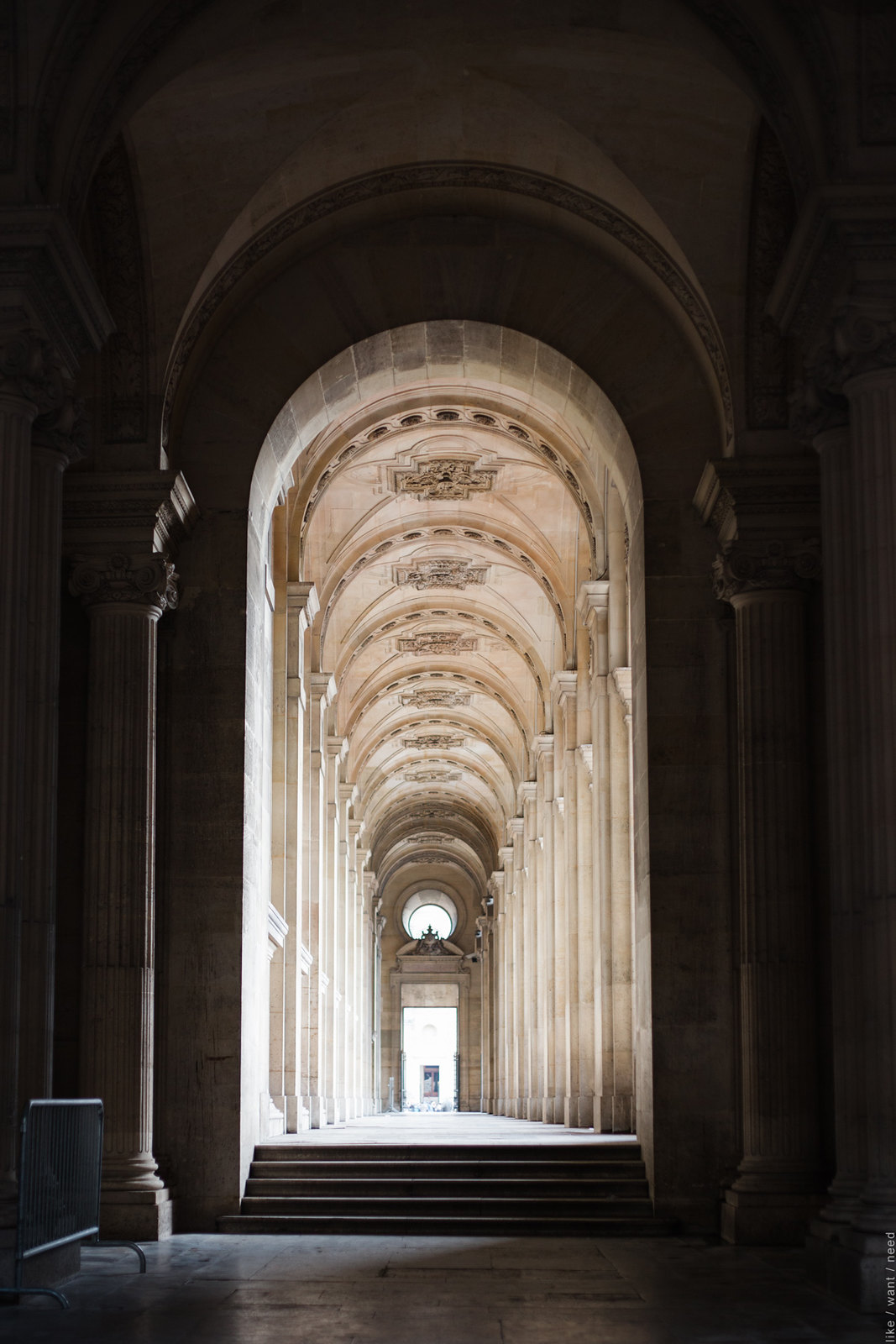 I’ve received a multitude of requests, through comments here and email, to make prints of my photographs from Paris available for sale. (Now that I think about it, I hope you weren’t all just being nice when you asked.) I’ve been working behind the scenes for a while now to make it a reality, and I’m ecstatic to introduce The Paris Print Shop. No middle man, no clicking elsewhere: you can now buy prints directly from my blog.

This is a big step for me, as it’s the first time I’ve ever attempted to sell my work. But I was doing more than writing in Paris; I was putting my Photojournalism degree to use, and I’ve been so grateful to have a platform to share my photos with you all. In sorting through the thousands of images that I have to print and frame for my own house, it struck me that now is as good a time as any to take a leap of faith and try this little endeavor. The same leap of faith got me to Paris in the first place.

And so, with my wedding just days away, why not add a bit more excitement to the mix? As a thank you to everyone who has been so supportive of this blog the past few years, and of my other creative pursuits, I’m offering a 20% discount on all prints through September 20th. Just use the code WEDDING at checkout.

I’d love to hear what you think! Happy shopping, kiddos!

What a week. Our officiant cancelled on us on Sunday…only to quickly find a wonderful replacement for us. I woke up to her email that morning, and you’d think that something that starts with, “Please try not be too alarmed to hear that I have some disappointing news to share with you,” from the person legitimizing your marriage would send me into a blind panic, but honestly? I was out of effs to give at that point. And plus, her backup is a fantastic and warm woman who immediately put us at ease. Crisis averted. Now we’re just tying up loose ends like getting place cards printed (“Wait, how many chicken dishes are at Table 4?” “Table 2.” “Table 4.” “What?” “CHICKENS. TABLE FOUR.”), wrapping presents for our bridal party, and generally trying not to let the stress get to us. One week from tomorrow! Holy crap, time flies.

Keeping with the theme of time as an elusive speed-demon, I’ve also officially been back from Paris longer than the amount of time I was in Paris, and that, my friends, is BONKERS. But if you thought that just because I’ve been home eight weeks that means I’m out of photos of my favorite place on earth, you are mistaken. 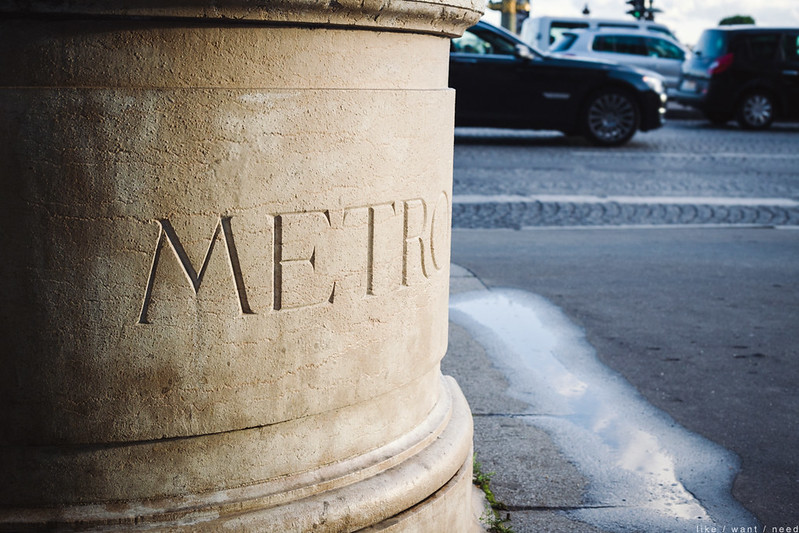 I am a confident public transit commuter regardless of the city, but the metro in Paris has to be the easiest system to navigate. The trains come quickly, switching lines is a breeze, and the majority of the stations are photogenic (think: the iconic pale green, wrought iron archways and Art Nouveau font). I was walking around Place de la Concorde one night and loved the way the light was hitting the stone banister. 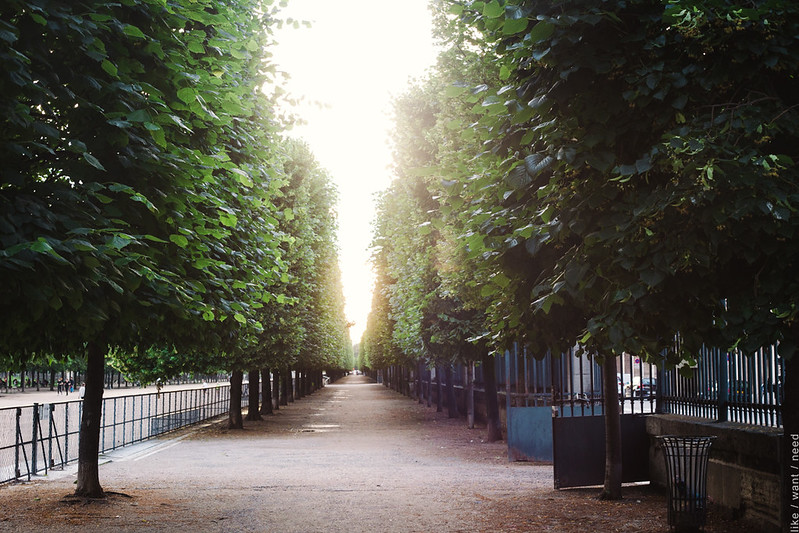 Not pictured: the fearless rat I watched run to that trash can, crawl in, fish something out, and scamper away again. Paris!

3. A little wine bar next to Pont Neuf: 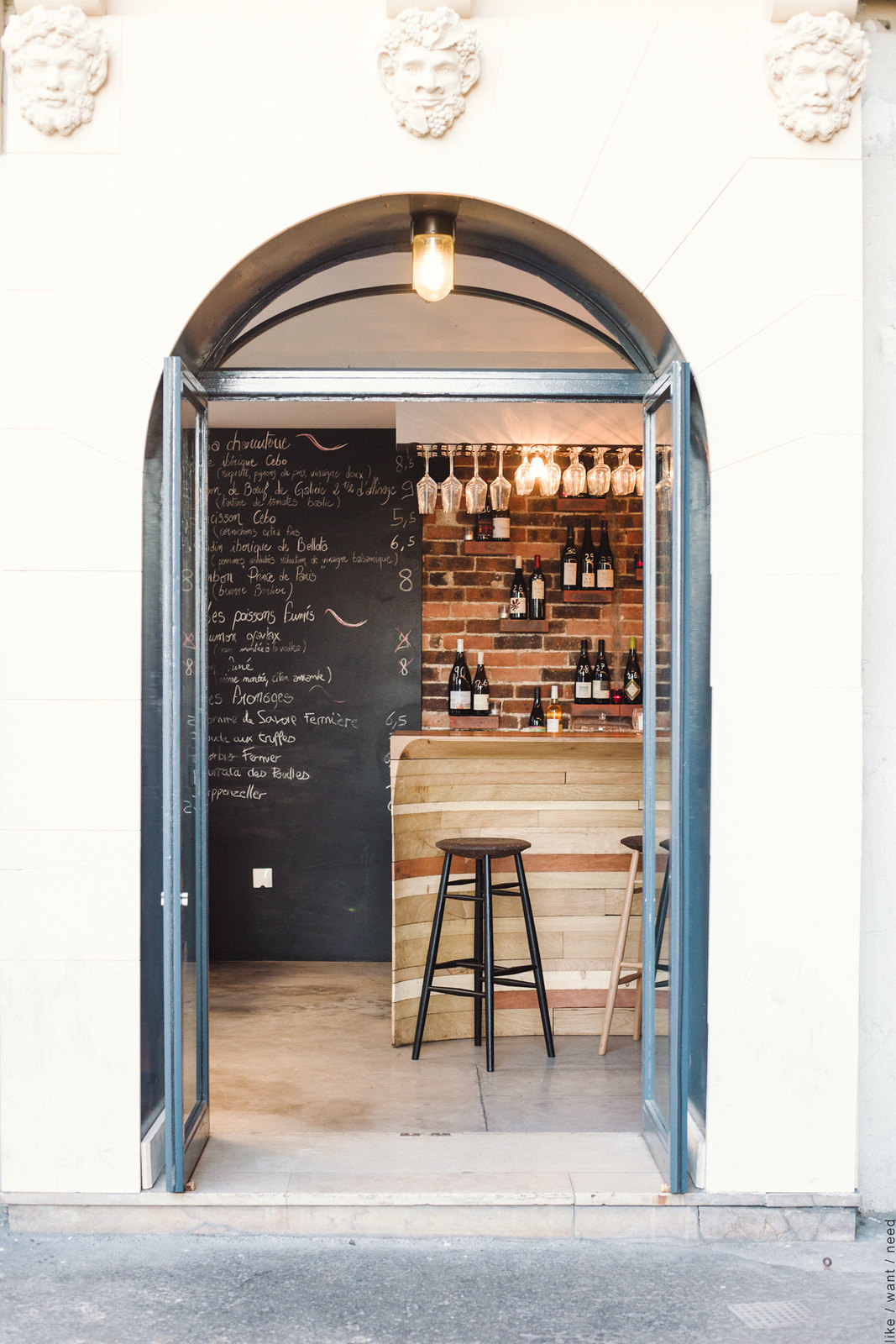 I only went to one bar by myself while I was in Paris, and it ended with a man in sunglasses asking to buy me a glass of Rosé, so needless to say it was a one-time deal. I went back to drinking wine on my terrace out of a juice glass, instead of at bars, but this charming little spot on Rue Dauphine was extremely tempting. 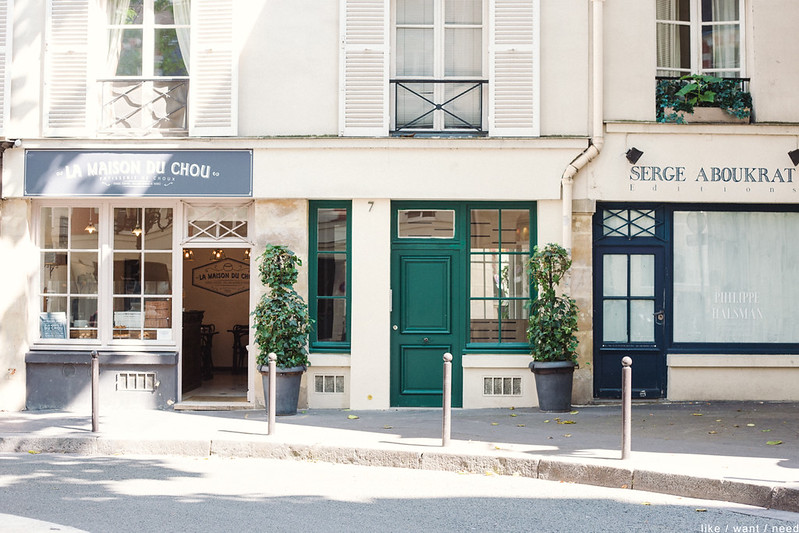 Behold my restraint: I stumbled accidentally on a petit patisserie that specialized in cream puffs…and I didn’t buy any! Behold my regret: massive. I’ve heard they are delicious. Place de Furstenberg is a hidden gem in Saint-Germain, and I sat for a bit just people watching, drooling over les choux in the window.

5. But really, the sunsets: 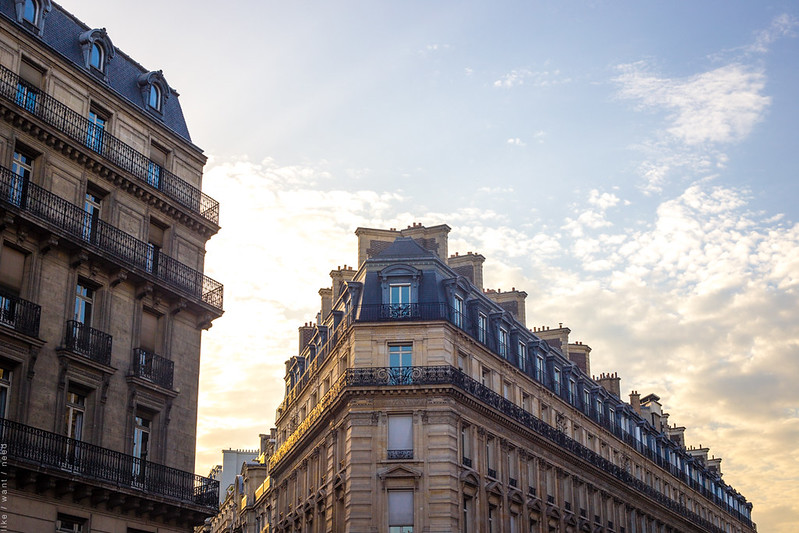 Because they were so beautiful, and so consistent, that you’d think I’d’ve become immune to them by the end of my trip, but non. C’est impossible. 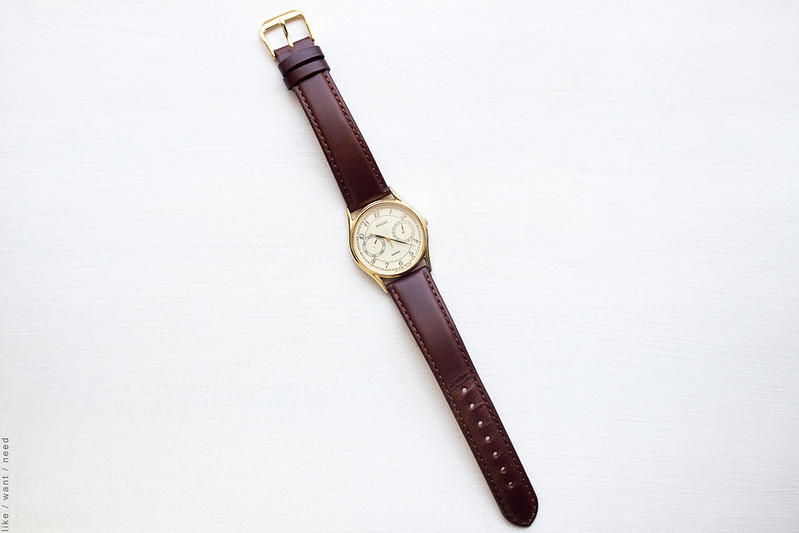 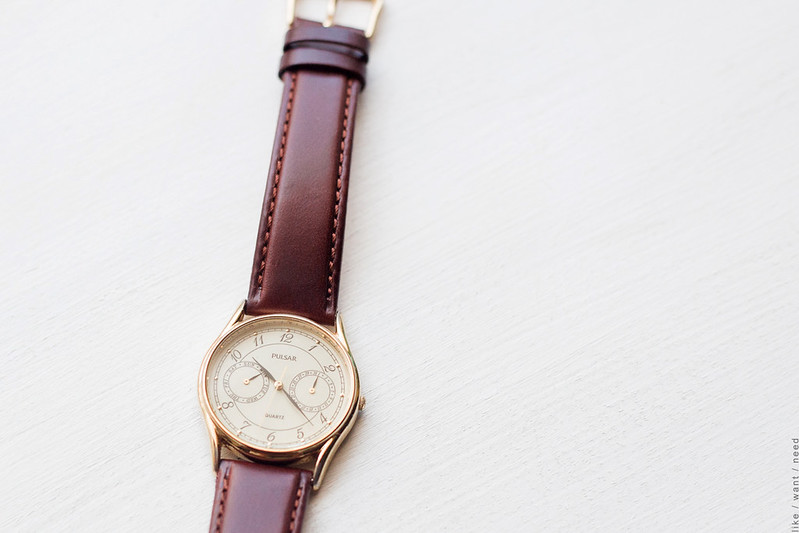 No, not wedding related, though I am getting married in 10 days (10 days!). No, this is a long overdue fix I finally attended to. When my dad died eight years ago, among the things I took with me from his apartment (a favorite sweater, a reading lamp, his old drafting table) before putting the rest in storage, was this watch. I don’t remember seeing him wear it –he had a pocket watch (repeat: a pocket watch) for much of my life– but I loved it immediately. There is a dial for the day of the week, one for the date of the month. The battery was dead, probably had been for years before I found it, and the leather strap was dry and brittle. None of that mattered. I wore it every day for years, even though it never told time. (The old adage about even broken clocks being right twice a day is applicable.) I wore it with the face on the underside of my wrist, wanting to feel it against my pulse. It never occurred to me in all those years to get the battery replaced; I wasn’t wearing it to tell time, I was wearing it because it was my dad’s.

Until this past weekend, when, upon realizing another of my watches had died, and so had Jamal’s, there seemed to be no better time to take all three in for repair. What had taken me so long? The whole affair took less than ten minutes, at one of those ubiquitous, unremarkable jewelry shops, where they buzz you in at the front door. A new battery and a new leather strap, and a new life given to an old watch.

I turned the watch over in my hands when we got outside, sort of like I was seeing it for the first time. And in the most fittingly obvious coincidence, guess where the strap was manufactured?

I watched a wonderful movie the other day, and was shocked that I hadn’t heard of it before Netflix suggested it as something I might like. “Last Love,” starring the incomparable Michael Caine as a windowed American professor living in Paris, was released last fall and somehow escaped my radar of all-things-Paris. I don’t want to tell you too much about it, because it’s a really beautiful, sad film, and it’s worth seeing if you can. Clémence Poésy is in it, too, flawless and charming and divinely Clémence Poésy-ish as usual. But without giving away the plot, I did want to share some of the interior sets, because, obsessed as I am with Parisian real estate, the sets were so perfectly designed I found myself distracted by the details in the background, a stack of old newspapers, the herringbone wood floors. The film is set in Paris in the late fall/early winter, and the light that diffuses every room and scene ranges from dusty blue to pale golden. It was visually stunning.

Have you seen it? If so, what did you think? I can’t believe I missed it when it was first released!