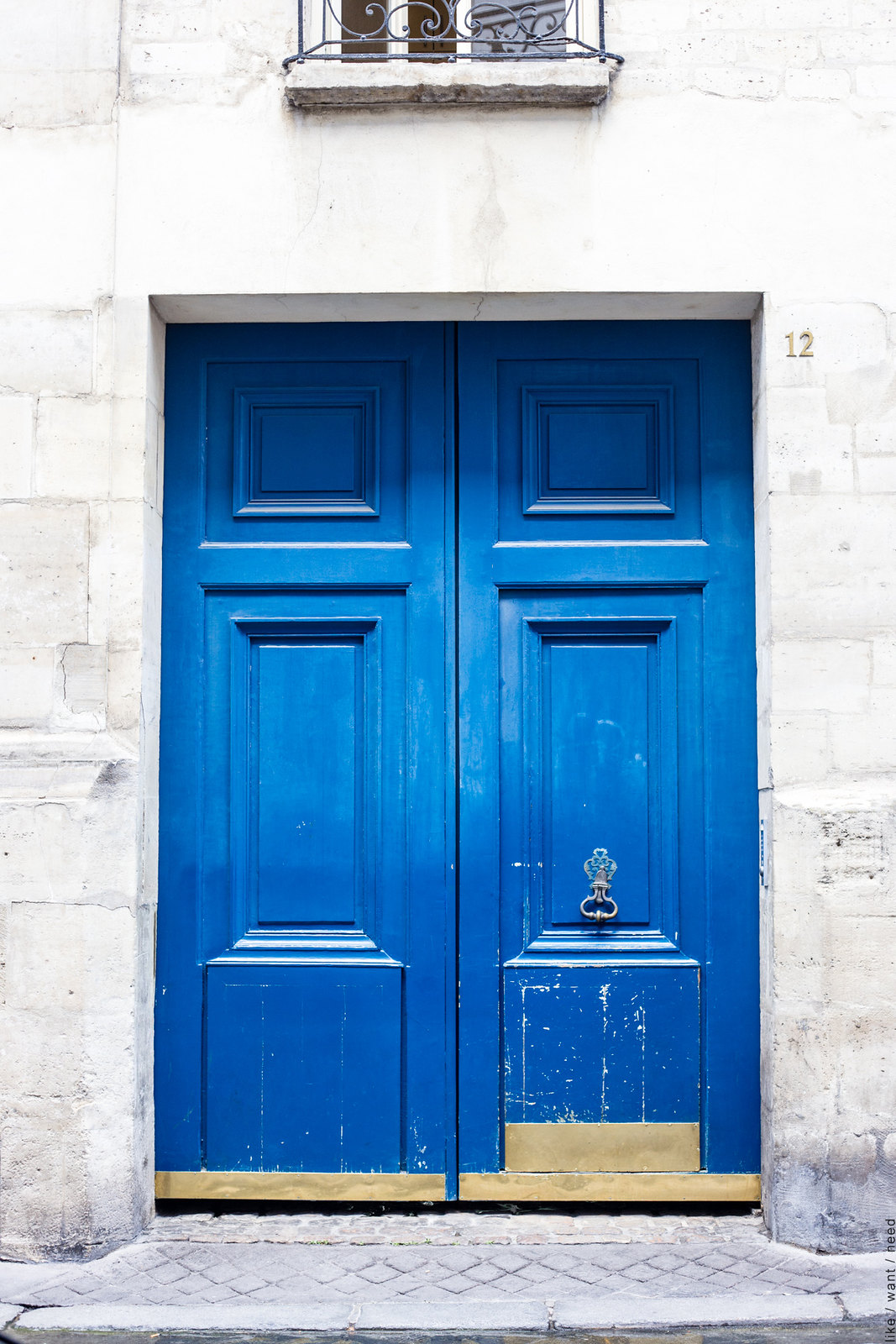 I stumbled upon this beautiful door near Place des Vosges one afternoon in May and was stunned by how vibrant it was. It provides a pretty, literal segue into a topic I’ve been meaning to address for a while now: my upcoming wedding (six weeks away! yikes!). You’ve heard the old wedding adage, “Something old, something new…” This is my something blue. Sorry, bleu.

I’ve made mention before about my lack of the culturally-dictated, Pinterest-level amount of excitement regarding the wedding. Don’t get me wrong, I could not be more thrilled about the nuptials themselves. I’ve known since Jamal and I started dating that we would be married one day, in a movie-style cliché: it was as if the sky got brighter and a crescendo of choral music flooded my ears. I can’t imagine a better person to share my life with, and I’m excited about growing old and (more) crotchety with him. He’s kind, he’s funny, he doesn’t care that I quote movies out loud while we’re watching them, and he never tries to steal my dessert. He’s also an incredibly hard worker, great with kids, and is a liberal. The stuff dreams are made of, people!

So I believe in our union. But the wedding? I could skip it. I would have gone to City Hall the day after we got back from Paris last year, newly engaged, and been done with the entire affair. For $50 we would have already celebrated our first anniversary by now. Throw in a nice, intimate dinner with our parents and immediate families, and I would have been pleased as punch. Also not broke.

Weddings these days have become spectacles, with all of the focus on the actual marriage lost somewhere between picking the perfect crudités and spending obscene amounts of money on a dress you’ll wear once. My dress was under $150, and that still seems like too much money. It’s five hours, and everyone has somehow become okay with the fact that it will be the most expensive five hours of your life, as if there is some correlation between spending $7,000 on a band (oh my god, we’re not) and a lifetime of happiness with one person. You are a bride for five hours, you are a wife for the rest of your life. I can’t help but think that if couples spent as much time thinking about the reality of their relationship as they do choosing table linens and crafting centerpieces, 53% of marriages in the US wouldn’t end in divorce.

This isn’t to say that some (most?) brides can muster equal amounts of excitement for both the wedding and the marriage. My own groom is one example. The two aren’t mutually exclusive. But they sort of are for me, and that’s okay. I’m not trying to say that big, expensive weddings can’t result in happy, lifelong marriages. I know plenty of happily married people! I also know a lot of divorced people, who separated for reasons that have nothing to do with their wedding, so I’m not implying a cause-and-effect here. But the amount of attention placed on weddings as some grand, fairytale day is just so not me. I get the sweats at the thought of everyone looking at me, or having to socialize for that many hours. It isn’t “my special day,” or any of the other hokey phrases that get tossed around the moment someone gets engaged. The excitement people harbor about weddings could be better directed towards the marriage. When did the first five hours of what will hopefully be a 50 year partnership become more important and worthy of celebration than, I don’t know, not killing each other by year 15?

I’ve shied away from talking about this because, as a woman-getting-married, to speak ill of the wedding seems to imply that you don’t want to get married. That couldn’t be farther from the truth! Am I horribly practical and unromantic for wanting Jamal as a partner rather than a groom? Maybe. He wanted a traditional wedding ceremony, so we are compromising and doing it our own way. Because I love him, and that is what you do in relationships. And he’s letting me put a bunch of New Kids on the Block songs on the list for our DJ, and I got mac and cheese as a side dish. Win-win!

I know I will survive the actual day –I may even enjoy myself!– but every time someone asks me, “How is wedding planning going?”, I physically have to restrain myself from eye-rolling out of my seat. Why does no one ask what our game-plan is if god forbid one of us falls really ill, or how we’re going to handle making sure our kid doesn’t grow up to be a sociopath? A marriage is so much more than a wedding. I’d rather focus on one than the other.

41 thoughts on “Something Bleu”