I apologize in advance for what will be the longest blog post I’ve written to date. I like to keep things short and sweet around here (for the most part), but this is going to be a long one (that’s what she said). Remember this post about my desk, and that little lamp I said I’d write about? Here goes.

Two or so months ago, I had the biggest WPP (White Person Problem) ever. I desperately needed a new night table lamp. (Other examples of White People Problems include not being able to decide where to go for brunch, having too much fuzz from your cashmere sweater on your peacoat, not getting enough foam in your latte, etc). My WPP was a doozy. I liked the look of these lamps from West Elm, but was not interested in spending $100, even if sometimes I sleep with a night-light on because, in the words of Shel Silverstein,  I’m Reginald Clark and I’m afraid of the dark (so please don’t close this book on me).

I just loved the sphere bases and the long, tall shades. I figured I could find something similar for a fraction of the cost if I just tried hard enough. I probably spent a good two days scouring the internet high and low for options. After hours and hours and hours of searching, somehow, I found this:

I realize you may be looking at this lamp, and looking at the West Elm lamps, and wondering what I was on at the time that I decided this was an adequate starting point. I also admit that it isn’t anywhere near as pretty as the West Elm lamp, and that it may in fact, be the most unpretty lamp of all time. But I’m one of those unflappable optimists, who sees promise in even the most lost of lost causes, and I saw that ceramic sphere base and thought I’d hit paydirt. I saw potential. And at that price (it was actually $12 when I bought it, now it’s gone up to a still-manageable $15), I couldn’t turn it down.

It arrived, and it was even uglier in person. I couldn’t bring myself to take a picture of it. The base was perfectperfectperfect, but the shade was just guh-ross. Cheap material, awful proportions, wasn’t even tall enough to hide the top 1/2″ of the 60W bulb I put it in, and was just bringing the base down by being so fug. Still, I was convinced I was on the right path; I’d found the perfect base, now I just needed the perfect shade. The search began.

I did what I usually do, I default to IKEA. IKEA rarely lets me down. I could go on and on and on about IKEA, but I’ll reserve my insane love of that store for another time. To try an mimic the height of the shade on the West Elm lamp, I immediately thought of these shades: In black. For now. At $5 a pop I could easily change my mind and go for another color later on, depending on how many design iterations my apartment goes through. The only problem was, the metal frame inside the shade was way too big for the neck the lamp. Like, comically wobbly. It went right over the neck and the switch to turn it on, and just rested on the base itself. Like so:

I became disenchanted and decided to just set the whole project aside. Clearly I do not share the same “never give up” attitude of say, Christopher Columbus, or that dude the movie “Rudy” was based on.

Then I saw this little number, from Crate and Barrel, and decided that it would be a waaay better (and easier!) night table lamp. 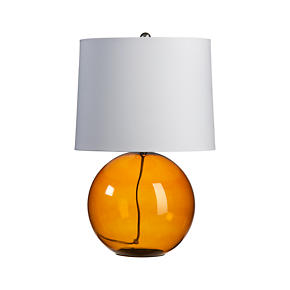 It’s sold out now, unfortunately for you, but is still available in two other colors. I got mine on mega-sale, and fell in love with it the moment it arrived. I relegated the ugly lamp to the corner of my apartment behind my tv, and tried to console myself by saying things like, “You did the best you could,” or “It was only $12 anyway,” but it gnawed at me for weeks.

Then one day, I had a flash of brilliance. Knowing that I had my heart set on both the base from Sears and the shade from IKEA, there had to be some sort of Frankenstein creation I could make to realize my dreams of the perfect lamp. I even had the perfect spot for it: the sad, dimly lit corner of my desk. I examined the shade and decided to rip out the metal frame that gave it shape, since that one fit perfectly around the neck of the lamp base.

I was on to something! There had to be a way to jimmy-rig one shade frame to another, and create some monster shade frame. I was well prepared to take the entire thing to Home Depot and find some ridiculous way to connect the two, when, in futzing around, I slid the IKEA shade right over the over frame with it attached to the neck of the base. It fit like a glove!

Many apologies for the shallow-focus blurriness of this shot. At first glance it seems disorienting, but this is actually a picture of the inside of the shade, looking down to the base of the lamp. You can see the IKEA shade sitting snuggly inside the original, gold wire frame . It’s a tight enough squeeze that it doesn’t wobble at all, and it looks pretty perfect from the outside; you can’t even tell there are two frames inside.

Look how sexy she looks, all lit up and cute.

And there you have it. For $17 and a pretty simple fix, I have a sweet little desk lamp and a seriously long blog post about it. It fits way better on my desk that it would have on my night table, and every time I turn it on I get a little surge of pride.

What fun/interesting projects have you tackled? I’d love to know!

6 thoughts on “How I Saved A Lamp”